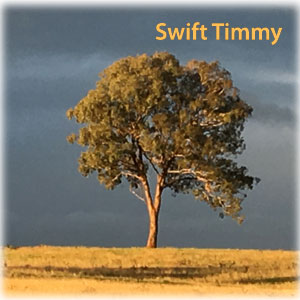 “Trees” is the new single that reveals a whimsical sense of urgency, to correct the catastrophic environmental damage that humanity has wreaked on Mother Earth. “Trees” is a family affair, written by Tim Channon and recorded under the name “Swift Timmy” at Mona Vale Music Studios on the Northern Beaches of Sydney, Australia. The single will be featured on Big Fuss Records upcoming “Our Green Earth” collection of songs intended to lift awareness toward world healing and earths recovery.

The vocal was recorded by Adelaide who is the writer’s daughter. She was only 14 at the time of recording. Tim Channon plays many of the instruments on the recording himself, including; Acoustic Guitar, Electric Guitar, Bass and Ukulele. Harriet Channon (also a daughter) plays the trumpet and Andrew Channon, (Tim’s brother) plays the piano.  Drums are Channing Lowe and backing vocals were completed by Adelaide, Harriet, Andrew and Tim.